Making a Technique your Own

On Art Bead Scene today, I've posted about copyrights in jewelry and beadmaking. Sometimes, I've scrapped designs and never offered them for sale because I felt they looked too much like someone else's designs. I don't want to rip off another beadmaker even if I'm not meaning to - check out my girl Margot Potter's Manifesto to see how a designer feels about it. I don't want to do anything like what that so I scrapped "Parts" because I felt it was too much like another beadmakers. 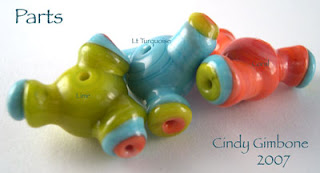 But I did like the technique of the floppy raised dots, so I incorporated that technique and feature into the Goth Kid bead but instead of just dots at the end, I make the end a red heart (hard to see in this picture): 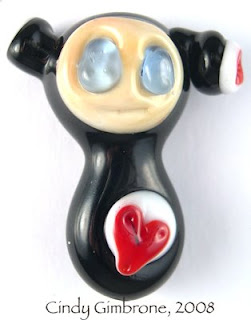 I think the use of the technique and feature of the floppy raised dots is a "fair use" application of a technique - i.e., this is what people mean when they say make it your own, find your own voice.


You may or may not like the Goth Kid bead and the floppy "ears" but my point was to share how you can learn or be inspired by a technique and use it in different ways.

How have you used a technique and made it your own?
Posted by Cindy Gimbrone at 7:38 AM

Labels: Copyright/fair use, Finding your voice

Clear, concise and brilliant explanation of fair use! Love it! Thank you for joining in educating others about copyrights and intellectual property!

Good follow on from yesterday and clear understandable example of technique versus copy.Thank you!

thanks Cindy..
tough .... to figure out what hasnt been done before.. or written about...
mona & the girls

Hi Cindy,
For accuracy, it's important to use the "fair use" definition as described by the US Copyright office:


The 1961 Report of the Register of Copyrights on the General Revision of the U.S. Copyright Law cites examples of activities that courts have regarded as fair use: “quotation of excerpts in a review or criticism for purposes of illustration or comment; quotation of short passages in a scholarly or technical work, for illustration or clarification of the author's observations; use in a parody of some of the content of the work parodied; summary of an address or article, with brief quotations, in a news report; reproduction by a library of a portion of a work to replace part of a damaged copy; reproduction by a teacher or student of a small part of a work to illustrate a lesson; reproduction of a work in legislative or judicial proceedings or reports; incidental and fortuitous reproduction, in a newsreel or broadcast, of a work located in the scene of an event being reported.”

Copyright protects the particular way an author has expressed himself; it does not extend to any ideas, systems, or factual information conveyed in the work.

Thanks for posting the legal definition of fair use. I wasn't offering up a legal interpretation of the law. Just trying to show how one glass artist thinks about these things in her studio.

I'll keep the definition - always good to have a copy around.