Button, button who's addicted to buttons? 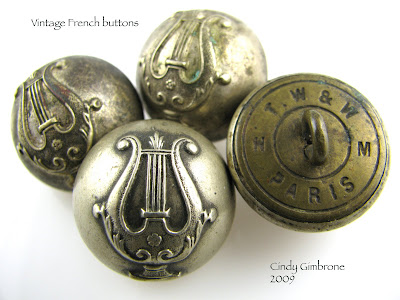 I've been developing a new addiction recently - buttons. Particularly French buttons. Since the Art Nouveau Stile Floreal came out so beautifully, I've been trolling ebay for more. Doesn't matter that's not where I bought the Paris button from, it's the easiest. But I'm leaning more towards Etsy these days after losing a button I wanted so badly in an ebay auction. I hate those auction snipers!

I'm working on expanding the Art Nouveau Series but I want a particular look - the "whiplash."

Can I really be held accountable if when looking for French buttons, I find others I love? Like the French lyre buttons above. Saw them and really tried to pass them over. Afterall, they aren't flowers and they're aren't obviously Art Nouveau. But something about them was charming and I had to have them! So, I find myself with several more buttons than planned but I'm sure they'll find their way into my work somehow.

How about you? In pursuing a particular interest, do you find yourself sidetracked because you've been charmed?
Posted by Cindy Gimbrone at 6:00 AM

every day, this happens to me. lol
I'm easily distracted by the bling of art beads! It's a sickness!

Gah! I love those buttons! I have been making things with buttons since the beginning. I love the old ones best that are made of metal and I have a little floral one with a marking like that "Paris" on the back. I need to do something special with it. I have been making rings lately and I have always used them at clasps. I made a necklace that had transit tokens (another addiction) and buttons among other things. But my biggest addiction (and hording tendency) has got to be skeleton keys and vintage Eastlake keyholes. I have a whole drawer of them! And people give me those things as well. Since it is my logo, they (rightly) assume that I wold love them! Thanks for sharing! Enjoy the day! Erin

I have ten gazillion buttons and for years have wanted to incorporate them into jewelry but can't bear to part with them yet! That is sad. Sigh.