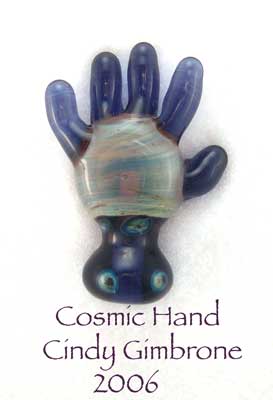 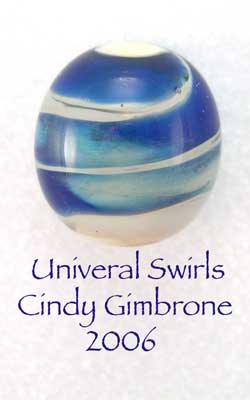 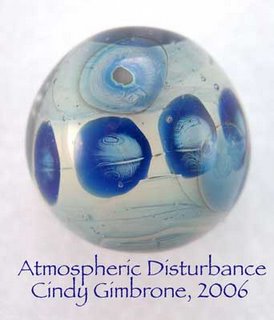 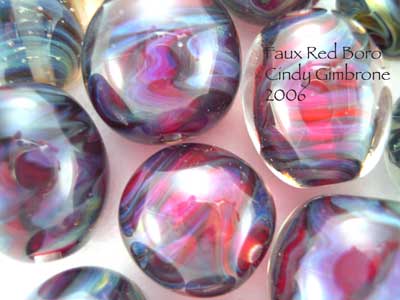 Lots of eye candy today of the "reactive glass" that I've been experimenting with....my glass hasn't been about reactive metals and frit to create different colors and effects. Other artists create beautiful beads using these materials and glass and I've been a great admirer of them - my glass has been about understand each color of glass in it's unaltered state and understanding how it flows in the flame and how it "holds" its form. Understanding the glass has allowed me to choose the right glass for whatever I was trying to create. So, for example, ivory can be very difficult to use in sculpture - a few years ago when I started to make my glass hands, I found ivory glass wasn't the color to use - it was too "floppy" in the flame. Black, Ink blue, cobalt glass held it's shape much better and I could sculpt with these colors much easier than ivory. As I've increased in skill, I am able to use whatever color I want but I keep in mind the properties of each color and construct any piece based on that. What attracts me to the glass isn't the color but its sculptural properties.
But lately, I've been interested in combining the reactive glass with the sculptural characteristics of glass. So, here are my experiments - faux borosilicate beads and a reactive glass form Doublehelix Glassworks. You see a familiar motif here, the hand, I always have to sculpt a hand out of whatever I'm doing. As a sign language interpreter and an artist, I make a living from my hands. Therefore, it's an appropriate motif for me.
Posted by Cindy Gimbrone at 7:13 AM No comments: 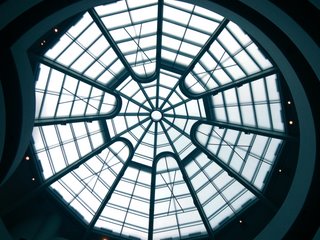 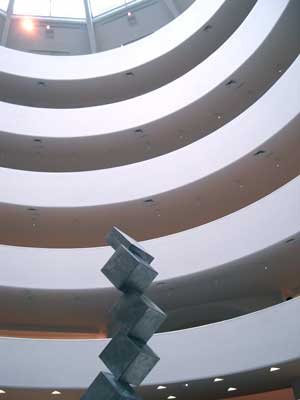 When I was at the Urban Glass Bead Show in March, I wanted to do one thing and that was to go to the Guggenheim Museum to see their collection of Kandinskys! I was excited to see the paintings but wasn't prepared for the artwork that is the Guggenheim building! You are allowed to take pictures of the lobby and that's what I've done here. At the very top is a beautiful stained glass window that looks like lacework in the sky. What an amazing structure - its form just makes you want to explore what's in it. I'm really at a loss for words - it was the best part of the trip! Driving from Chelsea to the Guggenheim, we had all green lights! I didn't think that was possible in NYC! Everyone should visit the Guggenheim once in their lives!
Posted by Cindy Gimbrone at 6:55 AM No comments: 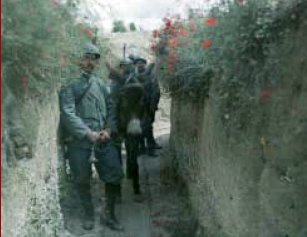 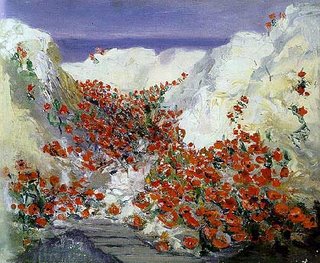 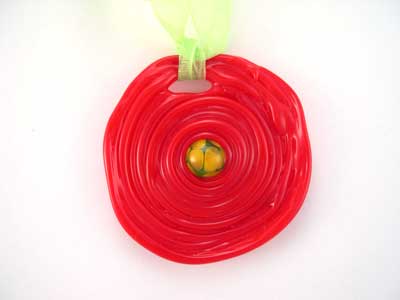 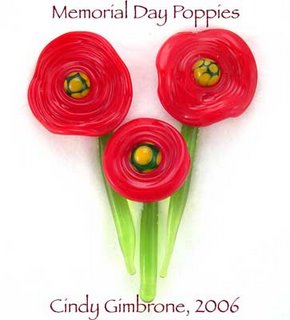 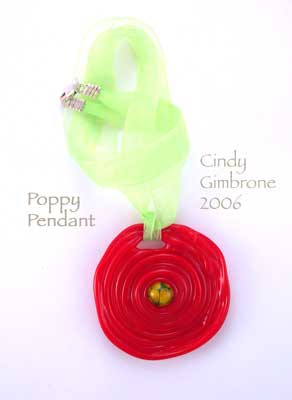 I've created non-wearable poppies and then a poppy necklace - both made in the style I remember as a kid. I hadn't realized the symbolism of the poppies.

For the past several weeks, I've been thinking about Memorial Day - how my mother called it "Decoration Day" and that we would always always always visit the cemetary and plant flowers.

Did you know that "Decoration Day" began during the Civil War? People were doing it informally because they felt the need to honor their loved ones who had died in war. Decoration Day was formally recognized in 1868.

I'm in awe when I think of how long the tradition that I learned from my mother has been observed. I'm saddened when I realize my teenage son doesn't know why we observe Memorial Day.

I also remember in the late 1960's - early '70's when as a kid I would dig out my change and buy a poppy from the VFW veterans (they must have been WW1 veterans because they were old to me :-) who were on every corner selling poppies.

My Mom would recite the poem that inspired the poppies, "In Flanders Field" (which I've posted below). Flanders Field is an actual place in Belgium. There is an U.S. soldiers cemetary there for US soldiers killed in WW1. It seems that after the destruction, the only plant that would grow were wild poppies. I've included the only known picture of poppies growing on the former battle site and a painting by the Canadian painter, Mary Riter Hamilton entitled "Trenches on the Somme."

I've been thinking about those poppies and how they have come to symbolize Memorial Day for me. I haven't always been so aware of what the poppies symbolize. Read the poem and you'll see.


In Flander's Field
by John McCrae


In Flanders Fields the poppies blow,
Between the crosses, row on row,
That mark our place; and in the sky,
The larks, still bravely singing, fly,
Scarce heard amid the guns below.
We are the dead.
Short days ago,
We lived, felt dawn, saw sunset glow,
Loved and were loved and now we lie,
In Flanders Fields.
Take up our quarrel with the foe
To you, from failing hands, we throw,
The torch, be yours to hold it high.
If ye break faith with us, who die,
We shall not sleep, though poppies grow,
In Flanders Fields.
Posted by Cindy Gimbrone at 10:03 AM No comments: 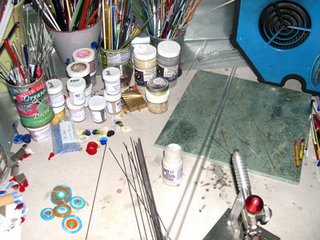 Look at my workbench! I've got work to do! I've got to dip mandrels to make beads and I've got to clean up the bench! Problem is, I like to have EVERYTHING right at my fingertips...problem is, you can't have everything set up within reach.....sometimes you just have to plan to use something!

You can see what I'll be working on today, I've got some 8mm soft glass tubing out that I've wanted to play with for awhile. I was lucky enough to get a pretty large supply for the cost of shipping - thanks, Jiley! I'm pretty sure this is Lauscha glass because none of the American glass companies make tubing. I know that Lausha carries an 8mm tubing so, that's my educated guess. I'll mix it with some other soft glass and see if I get any cracking. If it cracks, then it'll mean it's not 104 COE (not that it means anything to the average person - but is very important in glass!)

I'm behind in my picture taking. I'll take some pictures tomorrow morning and post something new. Got lots of new things I've been working!
Posted by Cindy Gimbrone at 9:03 PM No comments: 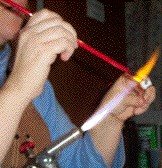 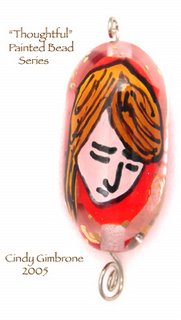 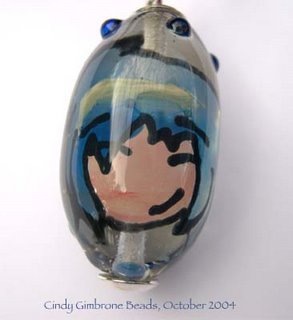 Been having alot of trouble lately with my website. Take my advice and avoid your domain name renewal lapsing! My renewal notices went to an old email and I didn't receive them. I found out by trying to log onto my website and a site for scrap metal appearing! I've since had to get a new domain name and a new website that will end up being much better than the old but what a pain!
Today's eye candy are painted beads. This might be a misleading name as the "paint" is finely ground glass mixed with an oil - slightly different than oil paints - the ground glass painting will melt into the glass of the bead - regular oil paints won't do this. I "draw" with enamel paint pens and use brushes to create a small painting on a small sheet of glass. The painting must be fired in the kiln to melt the painting into the glass. I then make a base glass bead at the torch (see picture). The small sheet glass painting is held with tweezers and warmed in the flame then rolled onto the hot glass base bead. The bead is shaped and placed in a kiln to anneal.
I have two examples of painted beads, one is called "Thoughtful" and is in a private collection and the other is a drawing by my son that I painted onto the bead - this one is mine!
Posted by Cindy Gimbrone at 8:31 AM No comments: