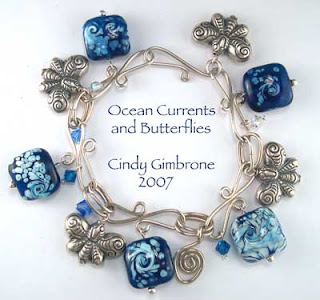 Before glass beads and jewelry, wire jewelry took up most of my time. I was living in near Sabino Canyon in Tucson, Arizona at the time and I just couldn't find any jewelry I liked. A friend suggested that I walk downtown at the end of January to look around at the gem shows in town - if you don't know already - Tucson Arizona hosts the worlds largest gem and mineral shows in the world during the end of January. Of course, at the time, I didn't know that and was surprised to find out what all the traffic jams had been about. I bought a few beads and stones. I picked up a copy of Handmade Jewelry: Simple Steps to Creating Wearable Art by Carol Grape and made two sets of earrings. Hooked, I found myself a week later at one of the local bead shops signing up for a wire class. I took every class they had - I loved it!

I still love wire - you'll see it throughout my jewelry designs, in my stitch markers and in the bracelet above. I use primarily sterling silver as it has the best temperament for jewelry design.

What's your favorite material to create with?
Posted by Cindy Gimbrone at 7:39 AM 4 comments: 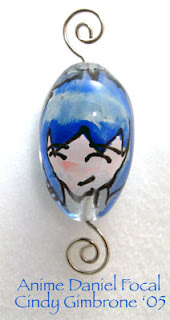 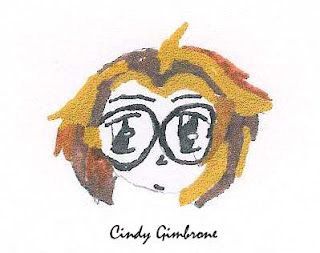 Over-Protective-Parent Spends Weekend Shadowing 15 year old Anime Fan! Those are today's headlines - yep, I'm back from the largest Anime conference in Canada! I might have mentioned before that my son (aka The Boy) is a HUGE fan of Japanese animation but if I didn't, I'm mentioning it again. He's been a fan since he was 4 and discovered Speed Racer and Pokemon I played Pokemon Stadium for hours trying to get my Togepei to evolve (yeah, I know Togepei is a weak Pokemon but how else was I going to play hard and still let a 5 year old win?!?)

This is the second Anime Conference for Over-Protective-Parent but it was the largest. I go to shadow The Boy and at the same time I can do some research into a niche market. The Boy made me into an Anime character shown above. I collaborated with him on some beads awhile back. I kept telling him I could make his Chibi style drawings into beads - and I did! An Anime "Con" might be the right place for them, but I needed to do some research.

I saw alot of food themed beads, donuts, tofu, cupcakes, strawberries made of polymer clay. Very cute and low price points. I saw a display of elaborate paper flowers made into pins. Some of the artists had made very small printings of their drawn characters and glued them onto the back of a glass nugget - then they attached a magnet or a pin. At dealers tables were base metal and enamel necklaces of berries, computer game "fruits" and letters - those were between $12 - $20 Canadian funds.

There was alot a separate area for the Art Show. The Art Show might be a more appropriate place for an Art Bead. Most of the beads I saw made into jewelry were inexpensive. A handcrafted Art Bead such as the one I've shown today would sell for between $70 - $100 Canadian funds. The painted beads are hand drawn then handpainted with custom mixed enamels onto a sheet of glass and then fired. But I'm not done with the bead once the painting is finished. A base bead is made in the flame and I melt the painting onto the base bead in the flame. It's quite a process but you can create small paintings in a bead - there's nothing quite like it. I have one of The Boy's characters in glass that will last thousands of years. That's some serious handcrafting!

I have that crossing the border thing to look into too - I have no idea how to start researching selling across the border in Canada! But in the meantime, I could sell beads that appeal to the Anime fan on line. I'll do some more research but I'm lucky to have a ready - made focus group (The Boy and his friends).

Have you explored a new niche market lately?
Posted by Cindy Gimbrone at 7:48 AM No comments:

Pictures worth a thousand beads! 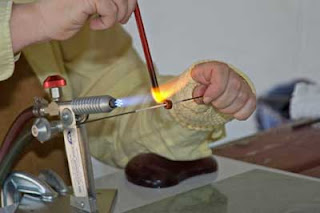 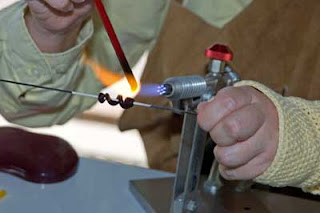 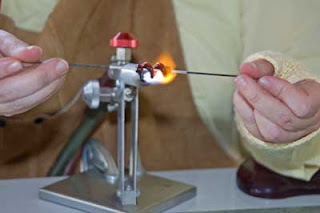 Yes, I know - a trite saying, "a picture is worth a thousand words" but in this case, it's worth a thousand beads because that's what I'm making in these pictures - beads and spirals! During Wednesday's demo at AirSep, the company photographer made the rounds taking pictures of the celebration for the company. He usually takes pictures of oxygen concentrators and generators but on Wednesday, he had some different subjects to photograph - a nice mix for him that day. His name is Phil and he kindly shared the photos he took while I was making beads. Cool, huh? Thanks for sending me the photos, Phil!

I've never seen my minor torch from this angle - the candles look good!

The glove protects my hand but I also have gotten used to the heat. I've built up a tolerance to the heat on my hand.

Have you built up a tolerance to something?
Posted by Cindy Gimbrone at 9:23 AM 4 comments:

Demos....talking while winding hot glass on a hot day 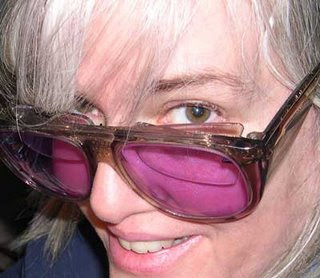 I did a demonstration yesterday of flameworked glass beads at AirSep, a manufacturer of oxygen concentrators. I have one of their concentrators and it's been a real workhorse - so I was happy to go over and make a few beads with an audience. I've discovered that it's a real art!

I wasn't really prepared to talk while I made a bead. When I work in my studio, it's a solitary pursuit of the glass - I don't have to describe what I'm doing while I'm doing it. Being a sign language interpreter, I'm comfortable with watching and not commenting. Not so for the audience watching me! The sales representative who was my contact narrated while I made a bead.

So, I started to narrate while I was winding hot glass on a hot day. I found myself stopping when I was trying to explain the technique. Makes for uneven beads. I was glad that they were demo beads and not likely to survive past the vermiculite cooling to get to the kiln at home.

Then comes a tap on my shoulder. The man who is the creative genius of the company was watching the demo with his wife. He asked if he could have the bead I was making as a memento for his wife.

It was the worst bead of the bunch - I had been talking alot through this particular bead and it was particularly uneven.

Sure I said. But I need to anneal it first. Let me take it home, anneal it, clean it and drop it off next week.

Thank goodness! A good bead comes out of the solitude of creating in the studio - that's where I'll make the twin to the demo bead - a nice evenly balanced bead.

That's what I did yesterday - what did you do?
Posted by Cindy Gimbrone at 7:29 AM No comments:

Here's the hair spiral I made from the customer suggestion. The customer, Amber, was nice enough to send me an email directing me to a picture. The picture is a bit small so here's a link to Amber's etsy shop where she sells really cool one of a kinds!
Posted by Cindy Gimbrone at 6:35 AM No comments: