Hands Up for Fine Art 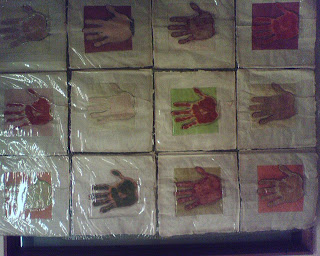 While on a sign language interpreting job at the college, I saw this
hanging in the Fine Arts building. It's sewn appliques on squares sewn
into plastic sheeting. Cool!
--cindyng
Posted by Cindy Gimbrone at 10:07 AM 1 comment: 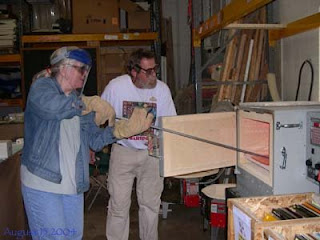 Nothing like hot glass in a hot kiln!
Posted by Cindy Gimbrone at 4:00 AM 2 comments: 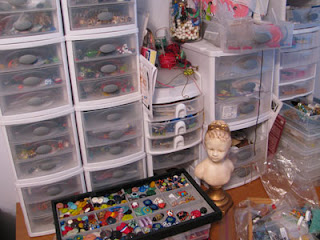 I'm over at Art Bead Scene for Studio Saturday day.
Posted by Cindy Gimbrone at 7:23 AM 1 comment: 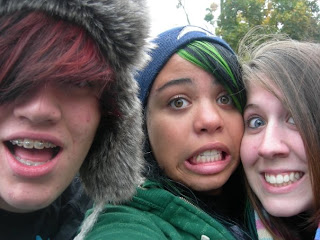 The Teen and few of his friends. Remember when you were like this?
Posted by Cindy Gimbrone at 12:04 PM 3 comments:

I've gotten a goody bag from Rings n Things so I'm playing with the goodies and will post what I've made on Friday this week. In the meantime, you can check out the Plays With Fire license frame a good gift for any flameworker would love!
Posted by Cindy Gimbrone at 4:00 AM 1 comment: 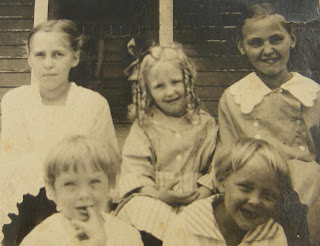 Have I done it right?

Some things are just karma. I've spent most of my life trying become the perfect person due to a family dynamic I'm now getting a handle on. I've been drawn to the Hindu and Buddhist concept of "karma" and "reincarnation" or the cycle of birth and death and rebirth. It's seen as a cycle of suffering that you're released from when you reach Enlightenment. Karma contributes to the cycle but it can be seen as endless almost - kind of like the family in Tuck Everlasting - there's a sadness in it sometimes. But I've never felt that way. I take great hope in the cycle. I'm relieved I get another chance to improve - to get it right! The idea of basically a re-do is very uplifting. So what if I have to do one thousand lifetimes? I know I can eventually get to Enlightenment.

But why have I shared my innermost spiritual beliefs with you? Seems kinda off topic doesn't it?

But I do have a point.

When I read Kandice's post on which tarot card she was. I thought it'd be a fun thing to do. I went over and got this one:

You are the World

The World is the final card of the Major Arcana, and as such represents saturnian energies, time, and completion.

The World card pictures a dancer in a Yoni (sometimes made of laurel leaves). The Yoni symbolizes the great Mother, the cervix through which everything is born, and also the doorway to the next life after death. It is indicative of a complete circle. Everything is finally coming together, successfully and at last. You will get that Ph.D. you've been working for years to complete, graduate at long last, marry after a long engagement, or finish that huge project. This card is not for little ends, but for big ones, important ones, ones that come with well earned cheers and acknowledgements. Your hard work, knowledge, wisdom, patience, etc, will absolutely pay-off; you've done everything right.

What Tarot Card are You?
Take the Test to Find Out.

Posted by Cindy Gimbrone at 4:00 AM 3 comments:

Kandice Seeber of Coloraddiction gave me the Kreativ Blog award. Thanks, Kandice! I'm admitting a bit red faced that when I've received awards before, I was always in the midst of chaos so I never posted them or followed up. This one is nice and simple - just nominate 5 other blogs that inspire me, let them know they've been nominated and link back to the blog who gave you the award.

Inspiring Blogs I love are:

Lynn Davis-I don't know how she does it, but Lynn comes up with new ideas and new beads regularly. She is full of inspiration and spreads it around liberally through her blog!

Angela aka Angelina Beadalina - Musings on life and glass is an interesting read. Gets you thinking about things - a good way to inspire readers!

Jennifer Cameron - beautiful lampwork beads are just about as inspiring as it gets for me!

Lauren Bracken writes about life and jewelry. Her work is luscious - just looking at it inspires me!

The Wire Artists Guild - seeing how I started out as a wire artist, I gravitate back to my roots. A group blog so there's lots of artists represented and that equals lots of inspiration!
Posted by Cindy Gimbrone at 4:00 AM 1 comment: 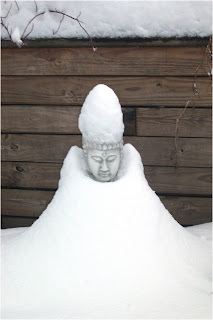 Posted by Cindy Gimbrone at 6:12 AM 5 comments: