I'm sponsoring this month's Art Bead Scene Challenge which is a Lee Krasner painting. I chose it because I wanted to see more female artists in the challenge - so I went looking for one. Married to Jackson Pollock, she was overlooked yet she created an impressive body of work. I was able to see this month's painting in person when it traveled to my hometown as part of the Action/Abstraction exhibition last spring.

Lee Rosenbaum of the Wall Street Journal had this to say about Lee Krasner:

I think the movie,"Pollock" did a great job portraying this part of Krasner's life.


My husband's grandfather was an alcoholic and his only child, my mother in law, did a heroic job trying to keep him alive and paid a high price for it. I believe Krasner did the same for Pollock.

Her personal life may have been draining, but her creative life survived thankfully. 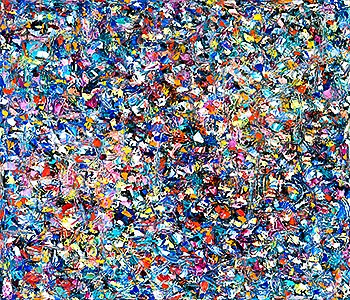 The color in her abstract paintings are lovely but I'm particularly enamoured of her later work. The Seasons in the Whitney Museum of American Art is particularly lovely and voluptuous.

I didn't know much about Lee Krasner when I chose Untitled for the ABS December Monthly Challenge. My interest had been piqued when I saw the movie Pollock - I loved the independence and the struggle. I wanted to know more and now I've shared that with you.
Posted by Cindy Gimbrone at 6:05 AM

cindy, thank you so much for this... i was an art history major and learned a bit about her then... i was intrigued by her art for itself but also as perhaps a way to channel her energies... am very excited about this challenge... have to watch that movie...

Thanks for posting this Cindy.

I love Lee Krasner and her work. There's a strong indication that she pioneered the action painting before her husband did, but did not receive the same attention since she was a woman. Also the political climate was not favorable, since the CIA was funding American Male Abstract Artists to combat the more realistic and figurative German artists.

Speaking of being overshadowed, check out their tombstones: http://commons.wikimedia.org/wiki/File:Pollock-green.jpg

Krasner was instrumental to proliferating Pollack's name and continuing to support his legacy after he died. I think it's also important to note that she was a savvy business woman and self-collected his works instead of dismantling his estate completely.

I love the subtle tones in Untitled (I assume it's the painting at the top of the post?). Thanks for featuring her :-)