While writing yesterday's blog post, I searched my blog to link to a previous topic. I was a bit shocked when a post from 2005 appeared.

I've been standing on this virtual corner of a crowded internet hollering at anyone who walked by since 2005?

You'd think I'd be hoarse by now.

I'm nothing if not tenacious.

It also means I've missed an anniversary. In honor of my missed anniversary, I'm going to giveaway a bunch of beads. 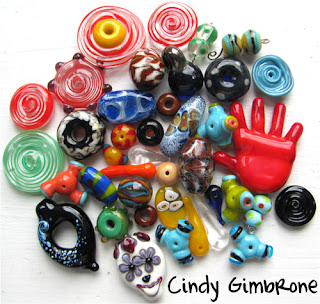 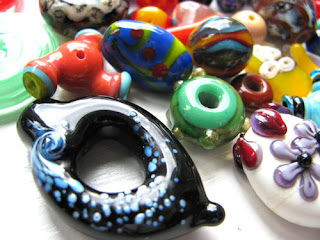 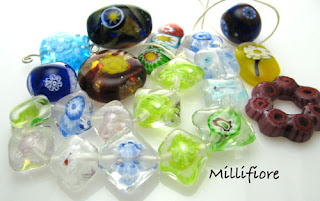 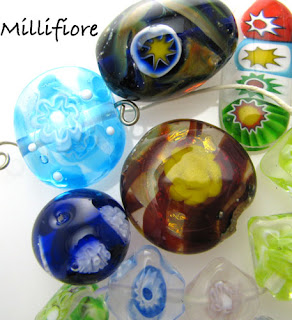 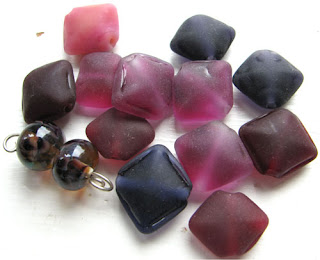 I'm not the world's best time manager which means, I've made some lovely beads that just never made it to my website to sell. Some beads have just been hanging out waiting to go to a good home.

Sooo, if you'd like to be entered in the drawing to receive these goodies for free, please leave a comment on my blog.

If you'd like to increase your chance to win the giveaway, I'll enter your name again if you do the following:

2. Blog about my giveaway on your blog with a link to this post and come back and leave me a comment saying you blogged about it and include your blog link in the comment. (You have my permission to snag the bead pictures from this post)

Blog about it before Monday, September 20th because I'll be choosing a winner of the Missed Anniversary Bead Giveaway on Tuesday September 21st, one week from today.

Good luck!
Posted by Cindy Gimbrone at 6:00 AM

These are amazing! What a generous give away!

Hope you have tons of entries!

Yes please! Beautifulness. Great beads, thanks for the chance.

I also blogged about it.

Oh your beads a lovely.

What lovely beads! And congrats on your (missed) anniversary. :)

Blogged your competition I hope it gets some viewings!

Fabulous giveaway and I've blogged about it. Keeping my fingers crossed.

Just stumbled across your blog, despite being a fan of your work for YEARS! How did that happen?

Congrats on the milestone. Here's to five more.

Well, happy belated anniversary to you. :)

I love stopping by here to see what's going on and to ogle pretty beads and things. Thanks for the giveaway.

What a wonderful assortment. I especially like that blue and black urn shaped bead with the large opening in the middle. Just a great shape/color combo, and the small blue spiral really makes it.

Congrats! I'd love to win!

Well congrats on those five years. That is quite an accomplishment. Some weeks I am not sure that another topic will bore its way into my brain but then it appears as if by magic. And the fact that you have some loyal followers is a testament to how wonderful this place is. So go on shouting on the street corner. I'll be here.

happy missed anniversary ....wow what a beautiful bunch of beady goodness, I would love to give those beads a good home!!!

That seems like an interesting and diverse mix of goodies. Would be a lot of fun to work with if I was lucky enough to win.

...and I blogged about the giveaway here: http://wildrosesandblackberries.blogspot.com/2010/09/cindy-gimbrones-lampwork-giveaway.html

First congrats on 5 yrs. I have a pr of earrings I made from your beads that I love( they match a dress of mine so well it's like you made them for the dress). I also just gave a friend some earrings I made from your beads & she loved them. I can't be as generous w/ the goddess beads of yours that I have, I love them too much,(although I did let one go for the last bead soup).

I would LOVE a chance for some of these beads! They're beautiful! Thank you - and congrats on the anniversary!

congrats on your blog-a-versary! here's to many more :D

and thanks for your generosity, this give-away is amazing. my fingers are crossed!

Oooo Cindy! Count me in!! I LOVE lampwork beads and so rarely can afford them.

And, I just blogged about it too: http://artemisiastudio.blogspot.com/2010/09/cindys-giveaway.html

Well Cindy...WOW, WOW, WOW what a fabulous giveaway in honor of your Anniversary!!! So many beautiful and "wonderus" beads...so thank you for the opportunity to maybe win!!!

I've blogged about your giveaway on my blog http://mamasgottodoodle.blogspot.com

Sure would love to win!

Thanks for commenting and to those who have blogged about it so far, thank you! What I love about a giveaway, it really brings the silent types out and I get an opportunity who is reading and not commenting. Love to see who you are! :-)

Congratulations on 5 years! That's great.Thank you for the chance to win those great beads.

Oh put my name in the hate please!!

Happy anniversary!! Thanks for the fabulous giveaway!!
~Sharon~
lunrei@yahoo.com

Wow, I love this giveaway, what a bunch o beautiful beads!
I am going to blog it ;-)
Barbara

Congratulations on 5 years!! I'd love to win!

At first, HAPPY ANNIVERSARY!!!! The beads are so beautiful! So I also posted this giveaway on my blog:
http://immer-wieder-perlen.blogspot.com/

Many greetings from Austria,
Nicki

Oh what a wonderful give away.
I love your beads.
Put a link on my blog
http://legolasperlenuniversum.blogspot.com/2010/09/blog-candy-bei-cindy.html

I blogged about your giveaway here:
http://susubloglistaja.blogspot.com/

Have a nice day!
Susu

Hello Cindy
I had to smile about your observation on how a give away brings out the "silent types"! So true! :-) Congrats on FIVE years of blogging! You've been a strong presence in the beading community for some time!

They are beautifull :D

I'm in too! The beads are gorgeous :) Happy anniversary!

Congratulations! I'd love to win it tooooo:))))!

very nice your beads! compliments.
I would like join in your candy blog, I have put the tread on my blog Magici Candy, this is the direct link:
http://magicicandy.blogspot.com/2010/09/candy-da-nireh-bijoux.html

my blog address is: claudiainrossodisera.blogspot.com
...you are welcome!!!

Awesome beads!
Now,I follow you as "wolfsrain".
I blog of your give away on my candy-blog:http://candy19candy.blogspot.com/2010/09/queste-splendide-perle-sono-il-premio.html
Thank
igea777@gmail.com

Haha!! I love this:
"I've been standing on this virtual corner of a crowded internet hollering at anyone who walked by since 2005?"
You are too funny!!!

OH. . .and I blogged about it!
Here's the link:
http://craftyhope.blogspot.com/2010/09/someones-hosting-giveaway-its-not-me.html

congratulation!!i love your blog..I'm an italian girl. your give away is fantastic.. my e mail is:viola_dovidio@hotmail.com.
cross my fingers..
kisses

very nice your beads! compliments.
I would like join in your candy blo!!!!
this is the direct link pubblicazione:
http://ibijouxdimonjka.blogspot.com/2010/09/giveway-nireh.html

This giveaway is wonderful ... I participate!!!

I blogged about it

Thanks for the giveaway

These beads are so nice! I participate too to your giveaway :)
In my blog you can find the link to it http://filofantasofia.blogspot.com/

Doesn't time fly when you are having fun!! I don't have a blog, but I love your beads, definitely a sign of a very creative mind.

Congratulations for your 5 years!
I would try to win!
This is the link about your giveaway on my blog:

Your beats are so greatful!
I linked you to my blog:

Thank you for the cance!

Your beats are so greatful!
I linked you to my blog. :)

And I would love to give your beads a wonderful new home.

I blogged about your giveaway

They are lovely, I would love to have them. I blogged you. :)

Wowser, what a stash. Me, Me, pick me. Really everyone good luck.

I blogged about your give away on my blog: Turquoise Sky

Thanks for the fabulous giveaway!!

Have a nice day!

So great beads! I would love them...
Kisses from Hungary

Wow what an amazing lot of beads!!

Would you like to enter in my giveaway?
Hugs

I put your giveaway in my blog sidebar

These are beautiful. Thank you for the chace to win.

(I've blogged it also in Hungarian and English)

I love these beauties. :)

I am also I horrid time manager! Congrats of the anniversary!

I just found your blog and there are some really great ideas for me to try. Thanks for sharing.

Hello!
wow!
amazing giveaway!
I want to play with you...
please enter my name...
lapappilon.blogspot.com
Hugs
Eva from Serbia

Happy anniversary... for your beautifull blog!
I like your give away
Bye Stefania
my blog: htt://manifattive.blogspot.com