Every so often I share my collections. A few months ago, I shared my Italian mosaic jewelry and today it's a collection begun when I was gifted a red enamel pin with an Asian style design on it from my grandmother-in-law. I didn't know it when it was given to me, but it's an enamel version of Nielloware. 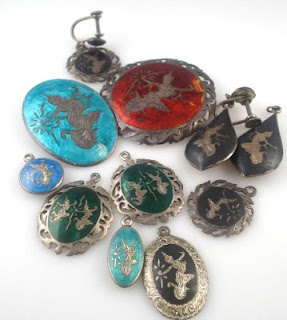 The red enamel is pretty, but it's not true nielloware - the real nielloware in the picture is the dark black/blue pieces. Both the enamel pieces and the nielloware pieces depict the Ramakien, the Thai version of the Ramayana, one of the most important literary works of ancient India.

I've focused on collecting pieces depicting the goddess Mekkala holding her magical diamond that shoots lightening. Why? Because that's who was on the original red enamel brooch. I picked up a pair of green enamel earrings that show Mekkala and demon Ramasoon preparing to throw his thunder producing axe at Mekkala in an attempt to steal her diamond.

Mekkala, the goddess of lightening is the most commonly depicted on Niello jewelry.

I love the idea of wearing a brooch of a powerful goddess figure with a magical diamond! I think all women should have one, don't you?
Posted by Cindy Gimbrone at 4:00 AM

I just read the bit about Nielloware, and I love the idea of looking at a piece of it and wondering how it came to be so far away from its homeland. One of my uncles sent a couple Vietnamese dolls back to my mom when he was stationed in Vietnam. I was fascinated with them as a little girl.

I'm so glad you shared the story of Mekkala, as I hadn't "met" her. What a wonderful blend of grace and power in a goddess.

Mekkala is awesome isn't she?! She's a good choice to put on jewelry meant for women. I like to learn about the origins too. I also have a couple of dolls from Turkey - my cousin was in the army in the 1960's traveled the world and brought back souveniers.