Corning and Glass Art Conference - Not quite what I planned

I got a late start yesterday. Frankly, when I got the email from GAS conference organizers that they were starting the line-up to watch Thursday's demos at 7am, I knew I was in trouble. Money being tight, I planned to drive down in the morning, very early and get there by 8am. With line up starting at 7 am, I knew I'd end up in the overflow and watching any demo on the big screen in the auditorium.

But the whole day was not what I planned. It started when I left late and hit a detour on the way down - taking much longer to get there. Ugh, but I tried to be relaxed about it - nothing I could do about it, right? Ooohhmmmmm. 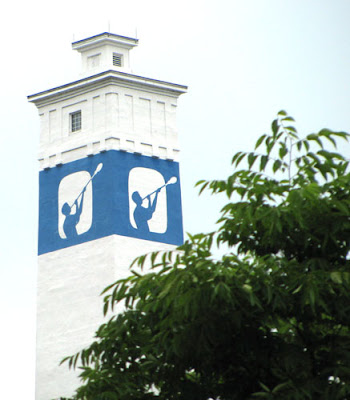 I finally got into town. Corning is all about glass - if you're a glassy, how can you not love Corning Glassworks, a company that has a large white chimney with a glassblower on it?

I went straight to the museum because Mickelson was half way through his demonstration. Sure enough, the Magic of Glass Theater was full and I was directed to the auditorium. I couldn't ask any questions or hear the questions asked but it the videocam was tight on him so I got a good look at what he was doing. One of the reasons I wanted to watch Mickelson is he does goblets - I soooooo want to do goblets! After watching him, I want to do photo resist AND goblets! I twittered about the demo but not sure my tweets got out. 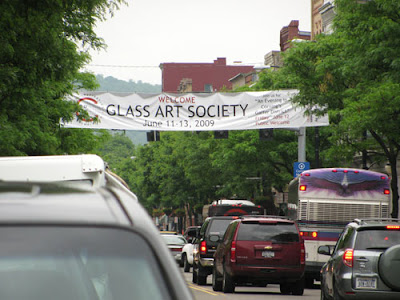 When the demo was over, I went out to an info table only to find that I had to walk downtown to visit the registration table. The representative I asked didn't give me very good directions on how to walk downtown quickly because I ended up walking the farthest distance possible! 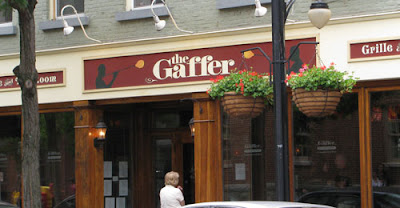 Got to see downtown Corning but missed the bus for the PAID tour to the Stueben Glass Factory. Since the tours were all sold out, I wasn't able to hop onto another tour.

I made the best of it by walking back to the vendors tent. I wanted to buy a new torch - I had settled on a GTT Phantom.

After a little bit of shuffling to get the attention of the GTT people, I found that my generator probably doesn't have enough oxygen purity or PSI to run the phantom - although it's supposed to. Annoys me, I put alot of $$$ into the generator.

The Glassline people were really nice - very helpful and no shuffling to get attention. I bought a set of Glassline pens I'll talk about tomorrow. Gotta play with them a bit today.

I walked through the museum and snapped a shot of the Chihuly in the front foyer. 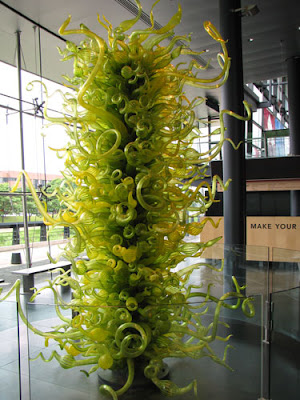 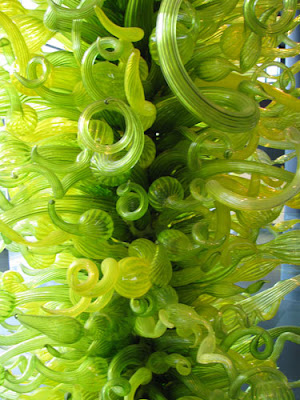 Posted by Cindy Gimbrone at 6:21 AM

Hope the comedy of errors isn't so bad in hindsight...and that the glass you did see, as well as the inspiration you got from the demo, made up for the troubles.

I hate it when the whole world seems to conspire against your best laid plans! But I am glad that you tried to make the best of it. I love Chihuly's work. He is fabulous! I believe he attended UW Madison...there is some of his work in the Kohl center there. Just fascinating and organic and alive. Thanks for sharing! Enjoy the day! Erin

Chihuly is my FAV!! My brother has struck up a friendship with him via emails and gallery exhibits. he is a really interesting guy!.

Oh how i miss the southern tier *sniff*

cross your fingers i get to go visit in July!

I do, I do, I DO love glass! Thanks for the virtual vacation and tagging along with you, Cindy.

Aw, man, I'm sorry everything went screwy! I would have been either gnashing my teeth or reduced to tears and then gone on a serious shopping spree to make myself feel better.

How I would have loved to be there!

And what a bummer that things did not go according to your plans, and the failed torch buying. Would love to see what you are coming up with, and the glass pen sounds intriguing.