I've finally made a decent murrini, Folks! I've tried before but most of them came out mushy. At Flame of Mind, I finally made a half way decent one and consider this one my first real murrini: 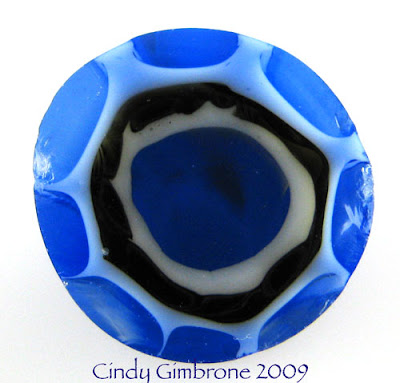 Not bad for a rookie, huh? Russ seems to approve. (Who is Russ? Check out the Rings n Things blog) 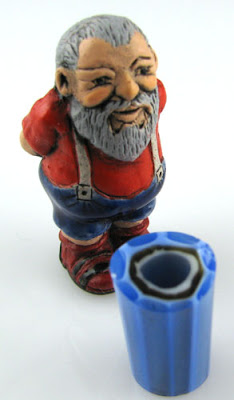 Not satisfied, I wanted to build a complex murrini. Beau built a "on the fly" warming plate out of fire brick and a kiln shelf and away I went. I cut four of the above murrini and created a core. I melted the four pieces into the core and pulled: 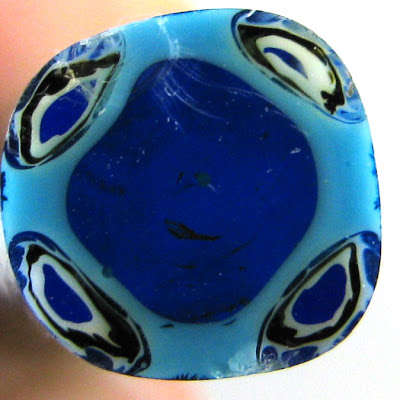 The side murrini melted in and became oblong. I didn't have enough of the first murrini to go all the way around the core - I was going for technique. Not too bad for my very first complex murrini.

Russ hasn't weighed in on the complex murrini yet but I haven't heard any complaints!

We've had our backyard dug up for about a month. We spent $10K having a new septic system put in. It's done just in time for The Teen's end of the year pool party. This is the state of our backyard right now: 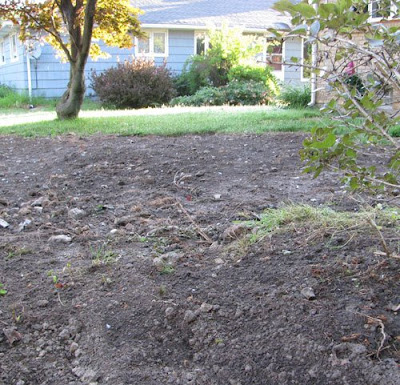 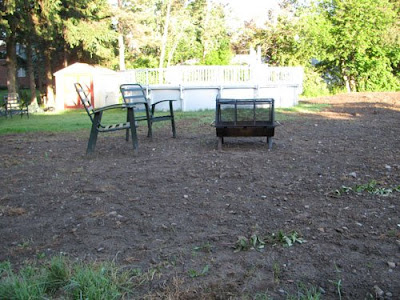 Potential mud just waiting to happen. Put a few teens in the pool splashing and throwing each other into the pool and you've got mud.

But we've got a hose. They can have mud and then it's the waterhose to clean them off.

I think Russ would approve, don't you?
Posted by Cindy Gimbrone at 6:56 AM

Beautiful Murrini Cindy. Great accomplishment. Hope the grass grows back quickly. This time of year it is usually hard to keep up with.

Thanks Tish! Murrini making is a good skill to have and I've been wanting to get a good handle on the basics for awhile now. I was tickled pink when I succeeded!

Thanks Mary. We're having the lawn seeded after the party. The hidden cost - when you figure the budget you forget the other things you have to do to finish up the job.

If Russ approves, you're doing great :) Nice murrini work there, Cindy. You're getting a handle on some complicated stuff!

That's a great bead! I'm honored to have my likeness near it! I'm a fan of beads with eyes and a lover of blue beads in general. Not that many bead lampworkers do murrini. I think I see it much more in "art glass" pieces than in beads.

I know it's a one of a kind but if there were more like it, it would be interesting to see what some of the lapidary bead workers would do to such a bead. Faceted windows into the bead, perhaps? Over on Facebook and Beadcollector.net I posted what Alan Curtis did with some chevron rods and a Nueva Cadiz. http://www.facebook.com/ext/share.php?sid=97848726939&h=XFs_4&u=GvMX4&ref=mf

Thanks! I consider this my first real murrini. Thanks for commenting!

Hi Russ (wait, didn't I just see you on my workbench? :-) You never know where you'll pop up next! LOL!)

Thanks for stopping by! Beads are so much smaller it's hard to put alot of design elements on them and making murrini isn't easy - so many beadmakers don't make murrini although there are a few very well known ones who do.

I'll go over and check out the chevron and Nueva Cadiz beads - thanks for the link!

wow, this is fabulous! It sure looked like Russ bead approved of the bead and then the real live Russ weighed in personally, you ought to be very proud. It reminds me of a deep blue ocean, ahhhh!

I love murrine - it looks so labor-intensive. Beautiful work!

Cindy keep an eye on that beautiful bead. A squirrel may come by and snatch it. You know how they like bright shiney things.
I don't know much about Murrini, but I do know I love that bead.

I think everything about this is Russapprovableisticafraglisticadocious!

Thanks, Lisa, Melissa, Jeannie, Jean! It was quite labor-intensive making it but it certainly made me appreciate complex murrini all the more!

It was so cool when the real Russ made a comment - awesome!