Talk it Up Tuesday

Are you wondering what's up with the alliteration in all my post titles? Me too. Maybe in another life I was a lyricist for cheesy turn of the century musicals! I'm pretty good at coming up with short and snappy titles.

But I've got something short and snitty to say today about the local Allentown Art Festival. Allentown is an historical neighborhood in Buffalo, NY, known for it's annual art festival among other things. It's a lovely neighborhood and one a visitor to the city should visit.

But the Allentown Art Festival feels old and stagnant. I visited the 53rd annual festival this past weekend after a lapse of about 5 years. There was white tent after white tent filled with mostly out of town, out of state artists with overpriced crafts. 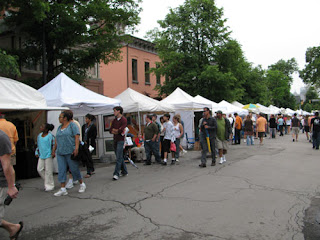 In a rust belt city bleeding population struggling to create jobs and income, most festival goers weren't opening up their wallets to purchase anything. But it wasn't the same old tents and crafts that really made me never want to go again, it was the lack of activity. The street corners were vacant when they could have been filled with local talent, musicians, street performers, artists, anything but the void that was there when you turned a corner.

I love Allentown, I love Buffalo but what's good about Buffalo (stability) can also be what's bad about it (stale). Let's add some entertainment to those silent corners, let's update the crafts and encourage the artists to have a wide variety of price points.

Let's oil up this Rust Belt City and make her run again!
Posted by Cindy Gimbrone at 6:15 AM

Labels: Coffee Talk, off topic post, Talk it Up Tuesday

I had the same experience at a craft show I participated in over the Winter holidays. It used to be a fabulous show, supporting handmade and local artists. I was surrounded by a gal selling dime store trinkets (literally came from the dime store) and another selling mass produced socks. They were both doing a booming business I'm sad to say.

I've been doing shows for over 12 years in many different medias over the years. Being from Florida, I must say we are feeling the same down here!! I stay local and my customers appreciate that part, but our shows need more talent! I've always had great feedback for my ever evolving work, but customers complain openly open the lack of quality allowed in shows and about there's nothing new, "it's just the same old, same old".
I don't blame the show promoters for a lack of traffic, but I do hold them responsible for the reputation of these annual shows. The pressure to sell spaces shouldn't override the need for quality artists! People don't travel hours to these shows just to see granny crafts OR imported fakes! How do we get our message across to the promoters? I've talked my head off in a positive way (I promise) about what we can do to improve! I get excited that it might sink in and the next show comes around, same thing. There is talent in every town, these shows have been our way to celebrate that talent!! Bring out something fresh!