In March, I did an Alternative Styles week. It was fun with lots of inspiration! 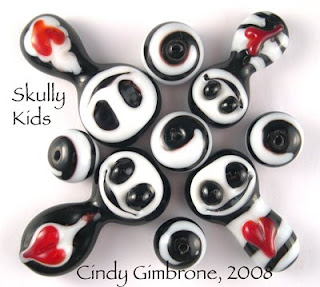 Mix up the styles I've talked about today and you'll get a Punk-Goth counterculture attitutude in red, white and black. The Ramones with a dash of red - but it's a style all to itself. Not quite Victorian or Modern Goth, not quite punk but a bit of both. A category all it's own. Emily the Strange was created in the skater culture by Rob Reger - who is Emily? From her website:

Emily is anti-cool, a subculture of one, and a follower of no one but herself. She’s the anti-hero for the Do it Yourself movement. Her favorite phrase is “Get Lost!” - both an invitation to travel to unknown places and an instruction to “Take a hike!” 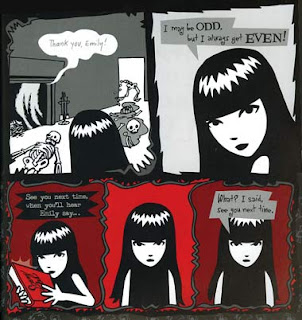 Emily the Strange uses a single color combination red, white and black. A punk with attitude and a splash of color.

The red white and black theme is used most effectively by The White Stripes a two person band who hail from Detroit Michigan. I'm always amazed what they can come up with using such a limited palate of colors.

The Punk - Alternative red, white and black palate is reflected in the Heartz n Skullz series. When creating the series, the Pinz in my Heart beads led to the Goth Kidz beads and Goth Kidz were the jumping off point for the Skully Kidz - in the same way as my posts have gone this week - punk to goth to punk-goth red, white and black. 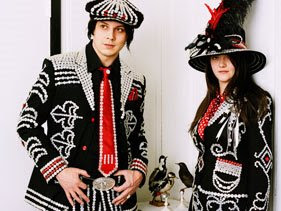 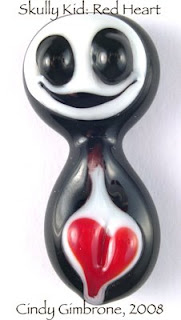 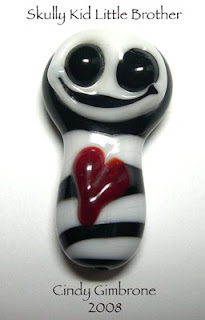 The White Stripes not only have surprising clothes in red, white an black but use it to stunning visual effect in their videos. Here's a perfect example in their video Seven Nation Army. Turn it up! Meg is awesome on the drums!

Cindy your writing is hilarious, love it. And your beads have such a fun attititude. Skully kids 4-ever!

Black and white with a splash of red makes for a very interesting read. Those Skully Kids are too adorable, btw, but don't tell them I said they were "adorable" :)

I'm starting to learn how to get my humor across in writing. I love irony and sarcasm and that's a challenge to write so people get it! Glad I'm succeeding :-)

Your secret is safe with me! I think they're cute in a creepy sort of way - they love to hang out with the Goth Kidz. They express their individuality in their appearance and I like it! :-)

Thanks for stopping by!
Cindy